has harsh words — and an obscene gesture — for those involved in her .

The topic — as well as other ups and downs she’s endured during her time in the spotlight as a TV host, reality star and manager — is the subject of a Fox Nation docuseries titled, Sharon Osbourne: To Hell & Back which debuts Monday. Osbourne gets real with Entertainment about being cut the Emmy-winning CBS daytime talk show after 11 seasons , and says she’ll probably never work again in the U.S. after being what she deems “canceled.” She and husband Ozzy recently announced they’re to their native England.

“I was thinking to myself: This is gonna be it,” she recalls of her March 2021 . “Over 50 years working in this industry and this is going to be it. This is it. I’m gonna go out as a racist? I found it so heartbreaking. And it was like: Why, why did this happen? Why?”

While retelling her side of the story in the four-part doc — about after he accused Meghan Markle of fabricating within the British royal family — The Osbournes alum is at her most candid. She fires off f-bombs at those she says wronged her, literally gives the finger to CBS and reminds us that the network is imperfect, citing, in explicit terms, former CEO Les Moonves (and husband of her former The Talk co-host Julie Chen)’s . She tells us all she has left is her truth having lost her job and credibility when CBS’s internal investigation determined her

“Let’s be truthful about this: They destroyed my credibility in America,” she says. “Let’s be really truthful. It’s like: I have nothing to be afraid of. Their allegations were wrong and were twisted and distorted.”

Osbourne, who says she wasn’t repentant enough for the network, continues, “We weren’t dealing with a company that runs, you know, religious programming. This company is like every other — ruthless — and will do whatever they have to do to not have any stain on their network. They [don’t want] anything that’s going to rock the boat…”

Asked if she considered suing CBS, she tells us, “Sure I could have. But do I want to waste two, three years of my life on them? No, I don’t want to do that. For what?” She also scoffs as reports she . She says she got “nothing … a ‘see ya.’ It was like in the movies when people get let go [and] you take out your box full of stuff. That was it.”

The boat was rocked when Osbourne backed Morgan who suggested Markle lied in her. The Markle-Prince Harry interview also aired on CBS, with the network . The next day, Osbourne’s co-hosts Sheryl Underwood and Elaine Welteroth accused her on-air of unconscious racism, which Osbourne claimed show producers and CBS executives . Welteroth, who later left the show, and her hairstylist later filed complaints alleging a “racially insensitive and hostile environment” on the set, leading to the show going on hiatus so CBS could conduct an internal investigation. During that time, Leah Remini, a co-host of Osbourne’s in Season 1, claimed Osbourne used derogatory language toward co-host Sara Gilbert, who is a lesbian, and Chen, who is of Chinese descent. Osbourne and denied using slurs against Chen.

Osbourne invited Underwood and Welteroth to appear in her doc, but they declined. She is clearly hurt by what she views as Underwood’s betrayal, having considered her a close friend as they worked side-by-side for 10 seasons. The doc details that friendship, talking about Underwood visiting Osbourne in the U.K. and referring to herself as “the Black Osbourne” in a 2018 podcast interview with the Osbourne family. While Underwood recently said Osbourne, Osbourne tells us she’ll never makeup with her.

“Never. No. Never ever,” she replies. “Why? Why would I? I worked with somebody for all those years, sat beside her, traveled the world with her, laughed, cried with her. No, because she’s not a friend.”

For the record, Osbourne remains friends with former co-host Carrie Ann Inaba, who defends her in the doc, as well as Amanda Kloots, who remains on the show with Underwood and . “Mrs. O” is also pals with Gilbert, who she speaks with often, and says any comments she made about her were not malicious.

“The thing was, I would say those comments on the air to Sara,” she says. “That’s how stupid they are. That’s how bloody stupid. It’s something between Sara and me.”

Asked if she’s spoken to Remini, who surfaced the claims, she says, “No, but I wouldn’t because she frightens me. Because she’s cray-cray… So I would never talk to her.”

The doc was made by Osbourne’s son Jack’s production company. He’s in it as well as Ozzy, daughter Kelly and Osbourne’s friends, who talk about how deeply hurt she was by the racist allegations. She’s suffered depression in the aftermath, undergoing ketamine therapy, with Jack saying she’s still “fragile” it.

Osbourne says she was bothered her family was dragged into the “absolute insanity” of it all. Not only did she get death threats — leading to her hiring security — but the trolling extended to her family.

“It didn’t hurt me about me. I know what I am,” she says. “But when they started on my kids and my husband, it was like — now this is ridiculous. Now this is absolute insanity. And that got me really, really angry.” 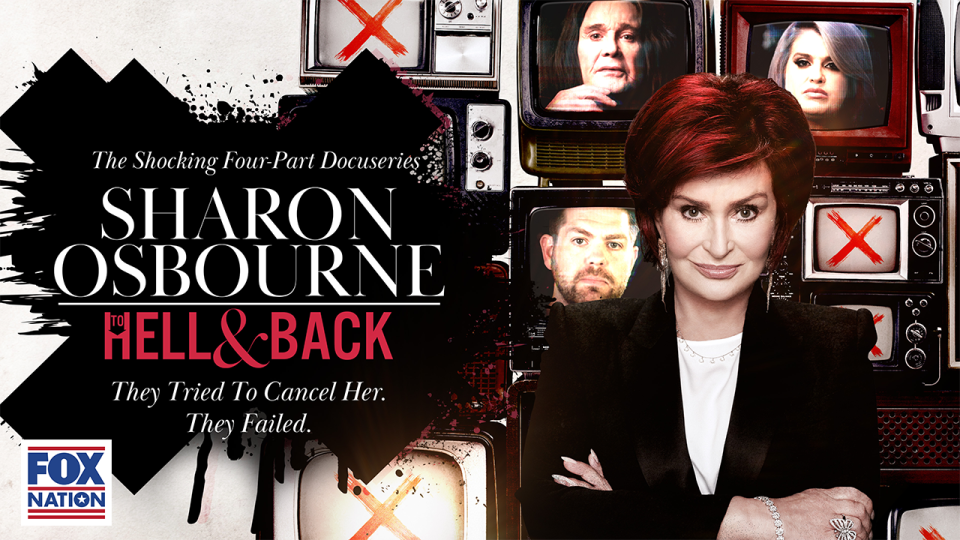 Even her pets got death threats, she says. “They gonna cut their throats? It’s like: You idiots. You morons out there. But these morons can affect you. Unfortunately, it’s the world we live in.”

This whole experience is partially behind her and Ozzy’s recent announcement that they’re moving back to England L.A., which has been their home base for 30 years. He’s ciited “” in the U.S. for the move, while she’s said she also doesn’t feel safe. But the U.K. is also where the work is amid The Talk fallout. Earlier this year, Osbourne , which is also, confusingly, named The Talk. She and Ozzy will also be making a BBC reality show, , about their move back to the English countryside, where they’ve kept a home. It’s also where Osbourne wants to grow old with the Prince of Darkness.

“I mean, look, [England is] where I was born,” she says. “It’s my home. I’ve always been proud to be British. I’ve never ever been one of these people that went to America and then had a Mid-Atlantic accent. I’ve always stayed true to who I am. And it’s just works out for us that way right now [to return].”

After all, “I’m also working on , which is coming out through Sony Pictures, and I’ve got so many things that I’m doing,” she says, citing Ozzy’s this week. “And I can do it anywhere. I don’t need to be in L.A.”